A journey through the archive 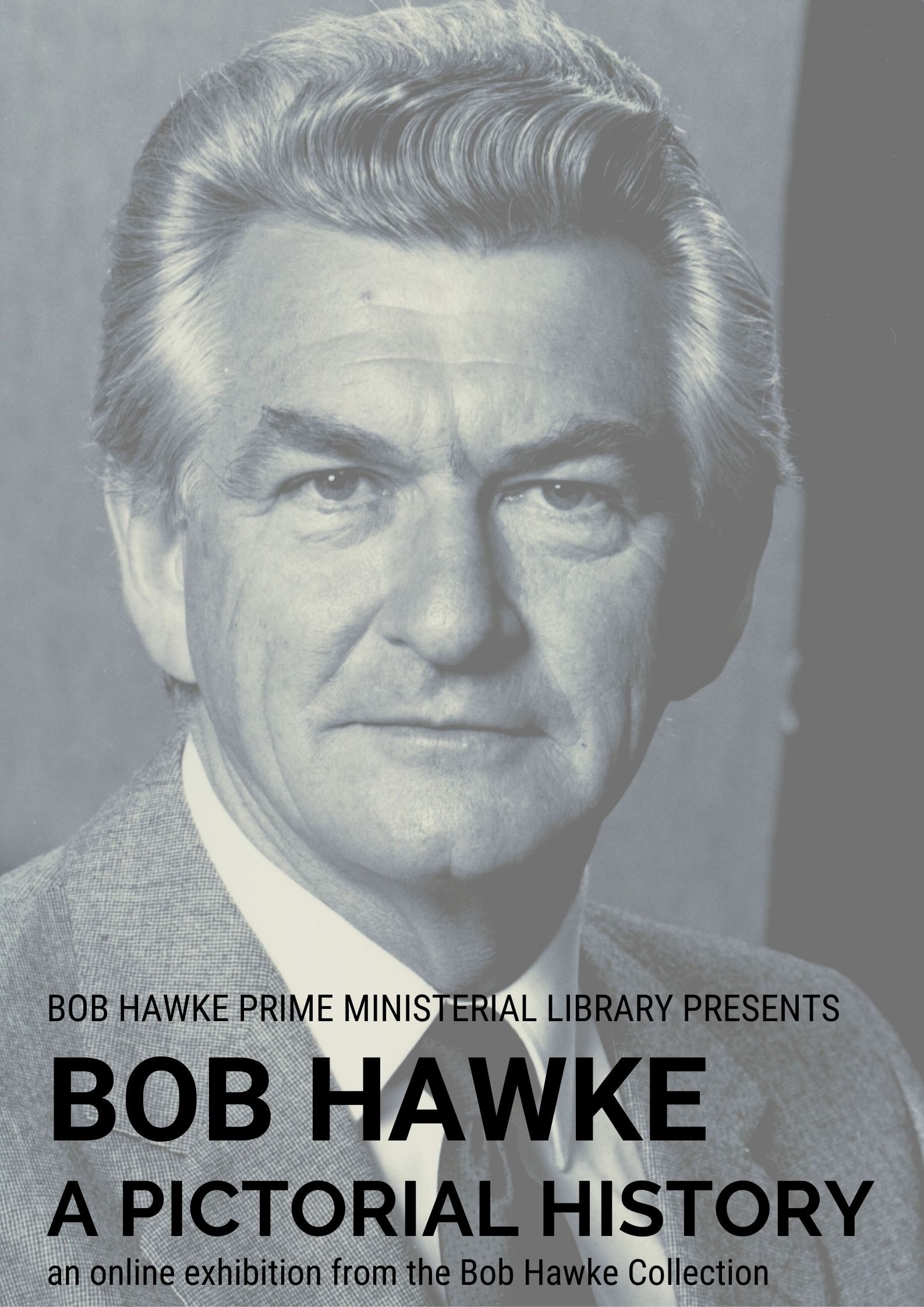 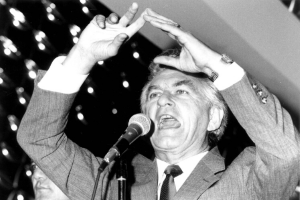 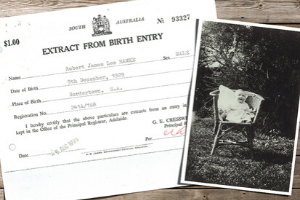 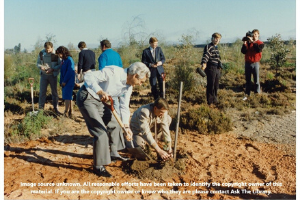 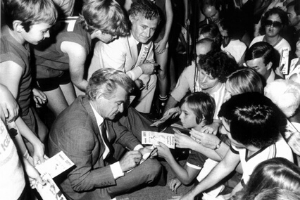 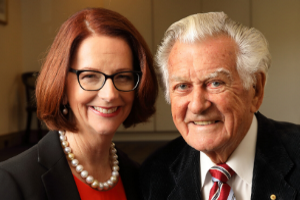 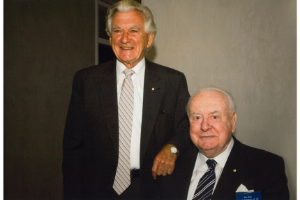 The Hon Bob Hawke AC GCL pictured with the Hon Gough Whitlam AC QC at the official opening of the Hawke Building, 2007. 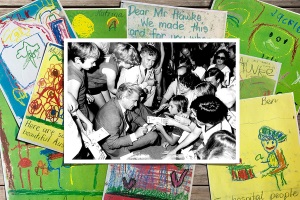 The Hon Bob Hawke AC GCL pictured with Mr Len Keogh, Member for Bowman, alongside a collection of children's drawings given to Bob Hawke. 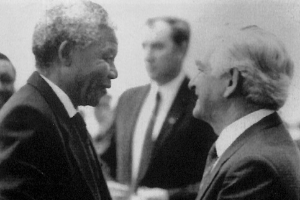 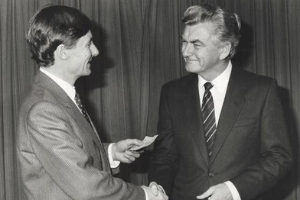 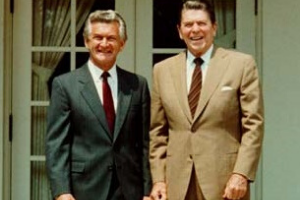 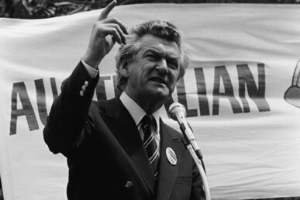 The Hon Bob Hawke AC GCL addressing a crowd after leading the Labour Day procession in Adelaide on October 11th 1980. 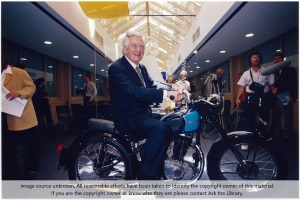 The Hon Bob Hawke AC GCL seated on a replica of his beloved motorcycle. 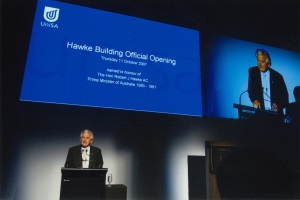 The Hon Bob Hawke AC GCL speaking at the official opening of the Hawke Building, 2007. 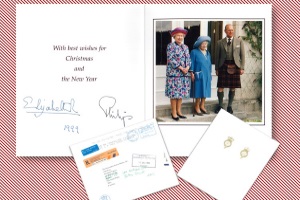 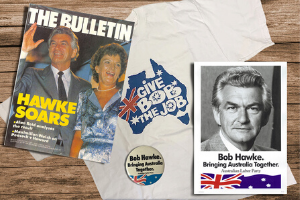 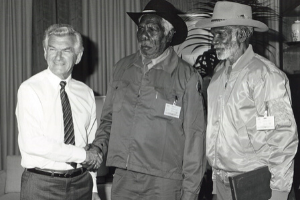 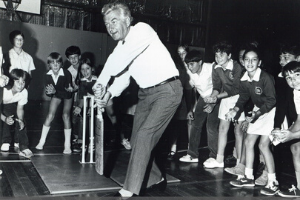 The Hon Bob Hawke AC GCL playing cricket during a visit to the electorate of Burke. 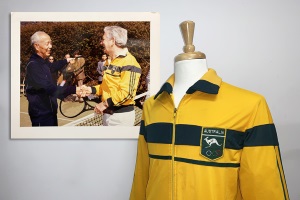 The Hon Bob Hawke AC GCL playing tennis at The Lodge in 1986 alongside Australian sporting memorabilia. 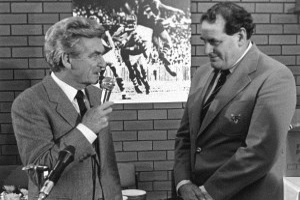 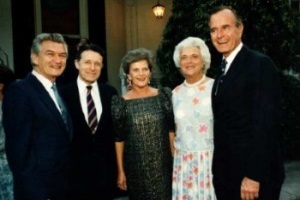 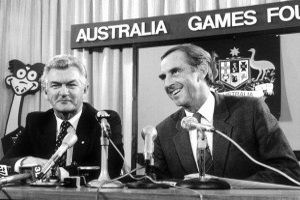 The Bob Hawke Collection has over a thousand digitized transcripts of speeches given by the Hon Bob Hawke across his career - before, during and after his time in Government. Most were given in his capacity as Prime Minister covering Hawke government activities and achievements as well as commemorating significant events occurring during his time in office.

Notable speeches in the Collection include:

So as our Bicentenary now comes to a close, I give you, our young people, this challenge : look into our past and see what we have done well and what we have done less well; look at our present and see what is good and what needs to be changed; then look to the future and ask yourself what contribution you can make to building an even better Australia.

R.J.L. Hawke's correspondence files document a period of Australian history that saw significant changes to the economy, social welfare, industrial relations, international relations and community values and provides insight into the impact that Mr Hawke had on Australian society. The content of correspondence will depend upon whether he was focusing on his union, political, business, media, charity, or scholarly careers.

After working as ACTU Research Officer and Advocate since 1957, R.J.L. Hawke was elected President of the ACTU at the 1969 ACTU Congress and was President until September 1980.
Correspondence created while Mr Hawke was ACTU President includes:

After losing a second leadership challenge from Paul Keating, R.J.L. Hawke tendered his resignation as Prime Minister on 20 December 1991. He resigned from Parliament two months later on 20 February 1992.
Correspondence created while Mr Hawke was still Member for Wills but after he lost the Prime Ministership includes:

Following his retirement, R.J.L. Hawke pursued a number of business, media, charitable and scholarly pursuits. R.J.L. Hawke died on 16 May 2019, at the age of 89.

The Hon Robert James Lee (Bob) Hawke AC was born in Bordertown, South Australia in 1929. He was educated at the University of Western Australia, Oxford University and the Australian National University (ANU). Prior to completing his studies at ANU, Hawke joined the Australian Council of Trade Unions (ACTU) as a research officer, later becoming the ACTU president from 1973 to 1980.

​Hawke joined the Australian Labor Party (ALP) while at university. He entered parliament in 1980 as the Member for Wills and in 1983 was elected as the ALP Leader. Later that year Hawke won the election and became Prime Minister. Under his leadership, the ALP went on to win the next three elections, making Hawke the longest-serving Labor prime minister in Australian history. Throughout his term, Hawke focused on public health care (establishing Medicare), education, human rights and reforms in economics, environmental policy and international affairs.

Records relating to the Hon Bob Hawke AC GCL are held in a number of organisations across Australia. More information and archival material can be found by exploring the collections linked below.

There is also a wealth of freely accessible information about the Hon Bob Hawke AC GCL available online. The resources linked below have been selected by staff at the Bob Hawke Prime Ministerial Library for their quality and accessibility.