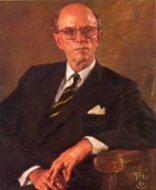 Access: Available to UniSA staff and students, for 4 hour in-Library use only

Explore the Collection through the Special Collections Catalogue

The Gavin Walkley Collection includes old and rare books on architecture, town planning and landscape design. Student work, publications and a diary related to architecture degrees offered by the University of Adelaide and The South Australian School of Mines are also included. Drawings, certificates, slides and photographs are included from Gavin Walkley's time as Head of the School of Architecture. Personal items owned by Gavin Walkley, such as articles, certificates, drawings, maps and a typewriter are also included.

Gavin Walkley was born in Adelaide in 1911. In 1934 Walkley completed a Bachelor in Engineering (Architecture) at the University of Adelaide. Walkley continued his studies at the University of Cambridge where he studied a Bachelor of Arts in the History of Art and Architecture and completed a Master of Letters and later a Master of Arts. Walkley then took courses in town planning and landscape architecture.

Walkley worked for various architectural firms in London and Adelaide, as well as the South Australian Housing Trust. In 1946 Walkley was invited by Louis Laybourne Smith to start giving weekly lectures at the School of Architecture at the South Australian School of Mines. In 1951 Laybourne Smith retired and Walkley became the Head of the School of Architecture. Walkley remained in this position for thirty years, during which time he introduced studies in building, quantity surveying, town planning, landscape design and interior design. In 1949 the School was the first in Australia to offer postgraduate studies in Town Planning and in 1958, Building Technology. Walkley retired as Head of the School in 1976.

Walkley was the recipient of a CBE (Commander Civil Division of the Order of the British Empire) in 1968 in recognition of his services to architecture.