The Basil Hetzel Collection provides a consolidated record of the distinguished contribution by Dr Basil Hetzel AC (1922-2017) to public health, both national and international, including his contribution to the elimination of iodine deficiency disorders through the work of the International Council for the Control of Iodine Deficiency Disorders Global Network (ICCIDD), now known as the Iodine Global Network.

In the 1960s Dr Hetzel led research that identified the link between iodine deficiency and brain damage in unborn children. The second half of his life was consumed with his efforts as a public health campaigner working towards the global prevention of this problem. Dr Hetzel spent most of his life in Adelaide and served as Chancellor of the University of South Australia from 1992 to 1998. He was a patron of the University’s Bob Hawke Prime Ministerial Centre. 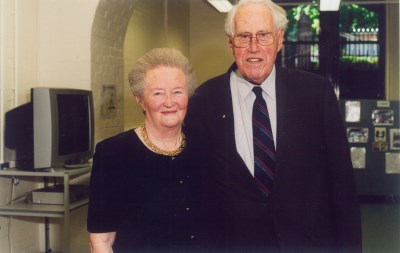 The Hon Dr Basil Hetzel AC was a medical researcher who has made a significant contribution to public health worldwide through his research which identified the link between iodine deficiency and brain development.

In the 1960s Dr Hetzel's research team discovered that by incorporating iodised salt into the diet, iodine deficiency could be corrected and this would prevent brain damage in unborn children. Since this discovery Hetzel became a public health campaigner on the inclusion of iodised salt in the diet. This has impacted more than two billion people in 130 countries and prevented millions of children from being born with brain damage.

In 1985 Hetzel initiated The International Council for the Control of Iodine Deficiency Disorders (ICCIDD, now the Iodine Global Network) which is a global group of over 700 scientists, medical administrators and health workers who work with the World Health Organisation (WHO) and UNICEF, to bridge the gap between research and application particularly in developing countries where iodine deficiency is a serious issue. Hetzel was the Executive Director of the ICCIDD between 1985 and 1995, when he became the Chairman until 2001.

The National Trust announced Hetzel as a National Living Treasure in 2004. In 2007 Hetzel was awarded the Prince Mahidol Prize by the King of Thailand for his contribution to international public health. In 2009 Hetzel was awarded the Pollin Prize by the New York Presbyterian Medical Centre, New York, for Pediatric Research which led to the prevention of brain damage caused by iodine deficiency.

In 2005 the Health Sciences building at the City East campus of the University of South Australia was named the Basil Hetzel Building.

Picture - Dr Hetzel with his wife Anne in the City East Library at UniSA, UniSA Library 2010